So, you’re going to use Twitter for your business. You’ve figured out why, what you want it to do for you, and how you’ll know whether it’s working or not.

But once you take those first steps into the world of Twitter, you find all sorts of strange and inexplicable things happening. Why is that pretty American student following you, and why is she so keen to share the secrets of unlimited wealth? How come Richard Branson isn’t following you back?

Just for you, here’s a quick field guide to the main Twitter species……..

Colossal numbers of followers, but following a relatively tiny number of people (often none) themselves. The Twitter account may or may not be the real deal, but the weirder the output (sample from Ms Banks:

“BellyButton talk time! I used to be outtie, now I’m innie. Weird. Maybe I am an alien… U outtie or innie? N how often u clean it?“)

the less likely it is to be being run by their PR agency. Mostly.
They’re probably not going to follow you back, or read your tweets. Sorry.

Follow them if: You’re a fan, and deal well with disillusionment.

Colossal quantities of followers, often on the same scale as the Sleb, but on closer inspection you’ll notice that they follow almost exactly the same number of people as follow them.

How are they finding and keeping up with all those folks, you wonder?! Well, they aren’t. They’re using automated software to follow people, and a good number of those will follow them back. If you’re one of them, you’ll often become the lucky recipient of an automated DM message excitedly offering you their latest online goodies.

Follow them if: You’re genuinely interested in their tweets. Many “pro” type accounts are where they are because they’re generating good content around a specific topic. Others are just great users of the autofollow software. A quick check of the timeline will tell! 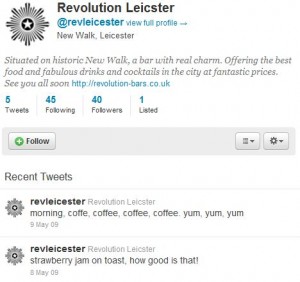 It’s dead, but it won’t lie down. The owner of this account got “a Twitter” because everyone said they should. Broadcast a few random comments, their customer base didn’t double overnight, so they gave up. 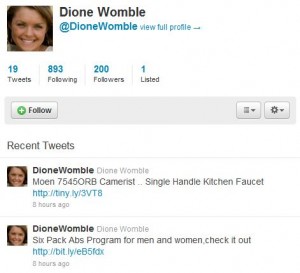 Getting more sophisticated these days, they’ll even have a nice friendly looking photo as their icon. A quick check of the nonsense they’re spouting will confirm the suspicions that should’ve been aroused by the very high followed: followers ratio. These are “bots”, automated accounts set up in their thousands to broadcast the Twitter equivalent of email spam.

Why are they following you? Cos they want to get your attention. Just ignore ’em and they’ll generally go away.

Follow them if: you’re really lonely; you want them to carry on following you forever.

We’re completely “live and let live” about how people use Twitter, but that little padlock on a profile always makes us wonder.

It means you’re not allowed to even see their Tweets unless you’ve been specially approved by them. Yep, there could be many reasons why….they’re shy….they’re on witness protection….they’re tweeting about their work at the forefront of nuclear physics. Or maybe they really are spies.

Follow if: you know them  and have passed the vetting…or you’re “Q”.

That’s all we have time for right now but we’re sure there are more – feel free to fill in any types we’ve missed, in the Comments