There are lots of automated or semi-automated tools out there which, on the face of it, will help busy employees save time on the management of their social media accounts.

Some of them are genuinely helpful without impacting on the quality of a social media presence. Many aren’t.

Facebook, for example, offers the ability to take a feed directly from a Twitter account. Businesses who are new to social media (and some who aren’t!) gleefully head for the “connect with Twitter” button. At first glance, they think it’ll help to keep their page lively and active through the arrival of lots of fresh content, whilst saving them time on “real” postings.

If you’re considering this for your Facebook page, please just stop for one moment and give it some thought. If Facebook and Twitter were the same, you’d not be working on a presence on both of them, would you?

This is where the trouble starts with the autofeed. We see lots of businesses who are feeding Twitter directly to their facebook pages, using services which don’t allow users to distinguish between broadcast tweets such as: 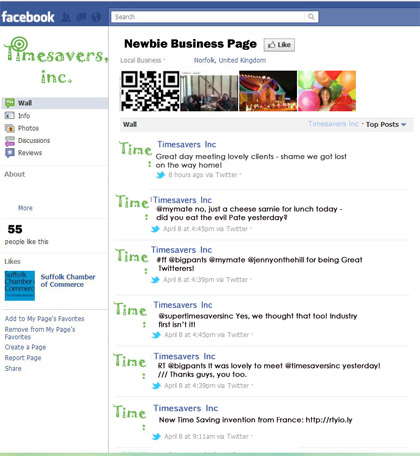 – not very inviting to those checking out your Wall to see if they want to hear from your business, is it?

But worse, think about what you’re doing to all those hard won Facebook Likers. Your Facebook posts show up in their News feeds, remember – that’s why you worked so hard to get them to Like your page in the first place.

So now, as a reward for Liking your page, your business is clogging up their Newsfeed with irrelevant and incomprehensible posts every time you have a conversation with someone on Twitter. Your Likers won’t have a clue what’s going on, and even if they did, chances are they wouldn’t be interested. You’re really asking for them to click that magic cross above your next post and banish your updates from their feeds forever.

If you really need to use a feed, there is at least one application available – Selective Twitter – which will allow you to only send Tweets with an additional hashtag to your Facebook page, so consider using that instead of the main Twitter applications.