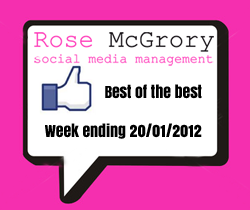 Welcome to our regular round up of the week’s most important online marketing and social media news and content for SME marketers.

This week’s biggest story has been SOPA – the Stop Online Piracy Act being proposed in the US. You’ve probably heard it mentioned, and may be aware that Wikipedia, Reddit and a number of other large social sites closed down for a day on Wednesday 18th in protest and to raise awareness of what’s being proposed.

While most of us agree that content creators need some protection from unlicensed usage, as is so often the case when modern technology and the government and legislative processes meet, this proposal is a ridiculous knee-jerk overreaction which genuinely risks hitting the Delete button on key aspects of the internet. If you’re interested in learning more about SOPA and its potential effects, try this: SOPA will take us back to the dark ages

We’re still seeing some interesting end of year data coming in (see also our social media stats 2012 roundup). This infographic illustrates the top brands which were active on Twitter in 2011, and isn’t necessarily what you might expect. I mean, sure, McDonalds is a massive brand, but the scope of material for being interesting, educational or funny on Twitter isn’t exactly huge. Just goes to show, you can find a way to make it work even if all you have to talk about is dead cow.

More data out, too, about our favourite social media site, Google +. Apparently Google + users are spending only 5 minutes per month on the site – less even than the equivalent for MySpace, which is generally agreed to be dying on its ex-hipster posterior.

Although we take anything in the Daily Mail with a pinch of (cancer causing) salt, this article about the communication habits of couples stood out as something we really hope isn’t true. It seems that although we can all be in constant contact with everyone these days, one in four couples speak for less than ten minutes a day. With an amazing two thirds of people saying they’d rather spend time on Twitter or Facebook than eating with their partners, it seems as though a savvy marketer may have more chance of connecting with Joe (or Jane) Public than their partners do!

If any of our readers aren’t yet convinced by the case against autoposting social media content, maybe this screenshot will convince you: autopost fail

If you find yourself surrounded on all sides by “social media experts” and want to sort the wheat from the chaff, this is the best article we’ve seen yet to help you do so – and made us laugh out loud along the way. 10 questions to evaluate a social media expert.

That’s all for now folks – feel free to add any top posts we’ve missed, and have a great week!