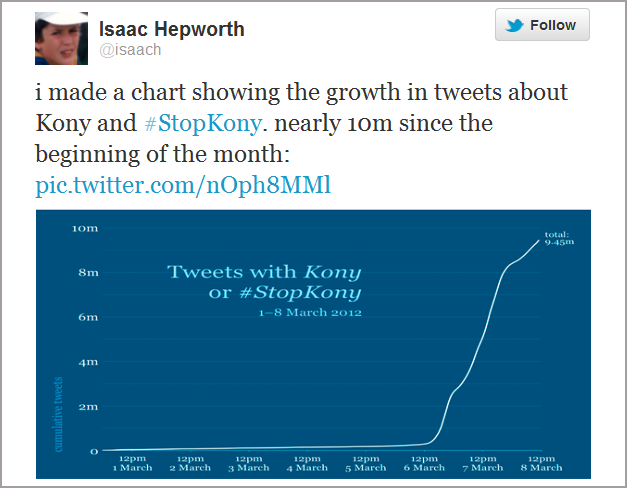 As we often say to our social media trainees, the “V” word is probably the most overused in digital marketing today – it’s a great aim to have, but only a tiny proportion of the content being produced every day goes viral.

Once in a while though, a truly global phenomenon comes along, and it’s always worth taking a look at – you might not achieve millions of hits, but there are often lessons there for your own marketing strategy.

Over the last couple of weeks, you might have noticed your Twitter or Facebook contacts using the hashtag #kony2012, #stopkony or a few other variants. What you’re seeing is the spread of a video made by nonprofit organisation Invisible Children, to bring the brutality of Joseph Kony, a rebel leader in Uganda, to the world’s attention. Within just a few days, links to the video seemed to be everywhere, which in turn sparked coverage in the mainstream media news.

Here’s the original video, if you’ve not already seen it.

The graphic we used to open this article is a graph made by one Twitter user, showing the amazingly steep growth of mentions around the topic.

Why was this video so successful?

We think there are a number of reasons why the video spread in the way that it did. Firstly, it is genuinely well made and thought through. By focusing on the impact on children, the filmmakers ensured that it would capture the imagination of the younger demographic who are so active on social media sites.

Secondly, the film includes an appeal to audiences to actively support the campaign and spread the word, and the narrator’s description of how he became involved with the cause is a great emotional hook.

But, there are many great films out there about equally deserving causes, which haven’t got anywhere near the exposure that this has achieved.

Really skillful use of social media, particularly Twitter, was crucial to this success.

A number of high profile celebrities with young fanbases tweeted about the video, but what’s really interesting is that often, they were sent the link by their own fans rather than by a PR agent. The fans asking for their idols’ support in spreading the word created a kind of virtuous circle, with more young people hearing about it and asking other celebrities for their support.

With apparently no direct contact from Invisible Children, the message reached Justin Bieber and Kim Kardashian, arguably two of the most influential users on Twitter; in the screenshot below you can clearly see that Kardashian saw the video after a fan tweeted it to her.

Did this come out of nowhere?

Another myth around viral campaigns is that their success just comes out of nowhere, but again nothing could be further from the truth.

Invisible Children had spent years building up a strong following on YouTube, Facebook and other social media sites. They also already had links to high profile individuals such as Oprah Winfrey – who mentioned when publicising the video on her show that she’d been involved with them for a while, although she’d not been aware of this specific video.

The campaign itself was also clearly carefully planned, with a teaser campaign building up to the release of the film making sure that the fan base was watching. So no, this kind of thing really doesn’t just happen overnight!