A couple of weeks ago, we hosted some seminars for Voluntary and Community sector groups on behalf of Cheshire Action. Many of the attendees were from groups not always known for embracing technology, such as Parish Councils, and we wanted to focus on communicating the basics of why social media is relevant and powerful in bringing local communities together.

On the day, one of the slides which generated the most debate was the one including the pie chart below.

It shows the actual breakdown of UK Facebook users by age group, and before we showed the stats, we asked the group to guess what proportion of Facebook users THEY thought would be under 18. 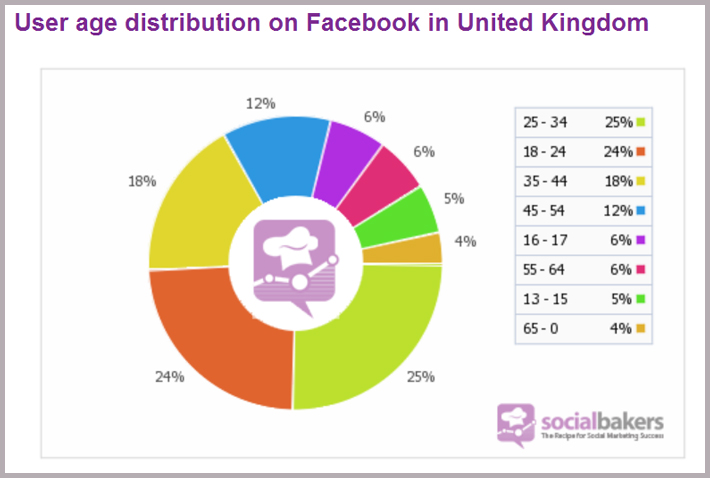 These statistics come from SocialBakers.com, which we’d highly recommend if you’re looking for any specific stats around usage of Facebook by country, or even by city.

Anyway, the guesses ranged from 75% through to 20%-ish. Nobody got anywhere near the true figure, which is that just 12% of Facebook accounts are accounted for by the under-18s.

This came as a huge surprise to most in the room, and we think you’d get similar answers from anyone who isn’t directly involved with social media. The perception is still definitely out there that Facebook is still mainly a young people’s space, and we often hear objections along the lines of “but my customers are all adults, this isn’t for us” from organisations.

That perception may have been true years ago, but these days it’s  just plain wrong. The single biggest group is actually 25-34 year olds!

Of course, there are subtleties which aren’t visible from these basic statistics. There will be differences in the way each age group uses Facebook, how frequently they log in to their accounts, and what they do while they’re there. These differences in frequency and type of usage between the generations need to be taken into account when planning a campaign, and will affect the type of content they’d like to receive from you. But the crucial point here is that statistically, the chances are that your clients, customers or service users, are already using Facebook.

So, we know that the overwhelming majority of Facebook users are adults. There’s more than that, though. The overall stats for the UK have now passed 30 million users, which means we’re very close to the point where there will be more people in the UK who do have a Facebook account than there will be who don’t have one.

Think about that in comparison to other media. Yes, everyone has a television, but they’re all watching one of a thousand different channels.

It’s the same with daily papers – vast numbers of people read them, but the market is split; even if you could afford to take out an advert in the Times, you’d still be missing all the people who read the Telegraph, Guardian, Sun, Daily Mail etc.  For the 30 million-odd Facebook users there’s just….Facebook.

So, if you belong to an organisation that hasn’t yet worked out how to make the most of this powerful direct line to half the country….you need to start.