How complicated is social media, really? 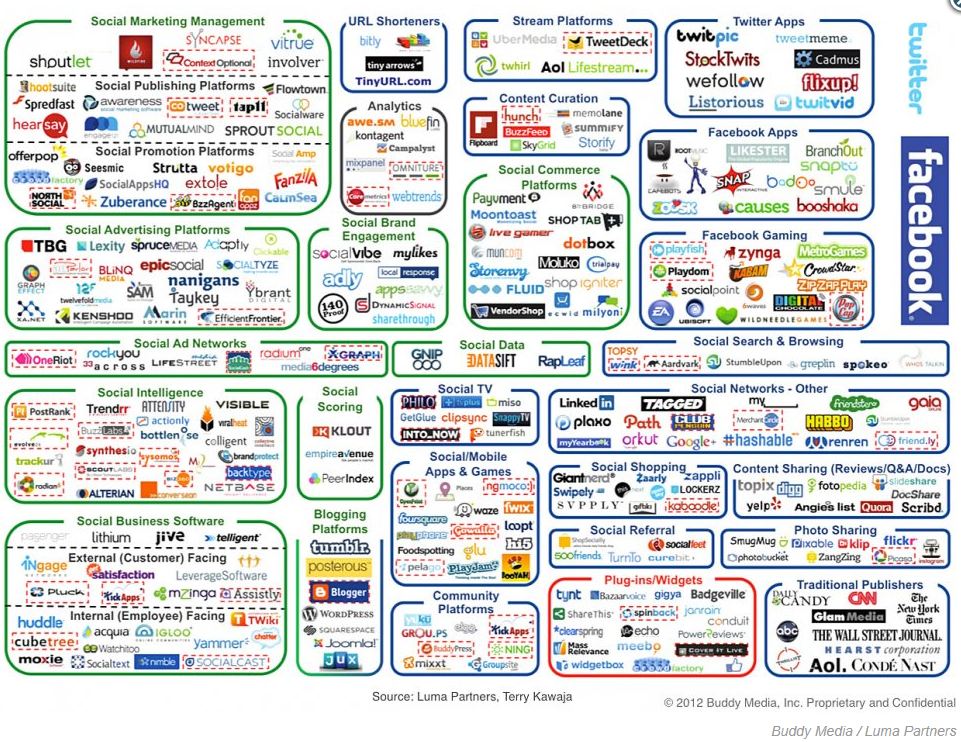 The slide, produced by Buddy Media, documents most of the sites and areas which would be involved in a really comprehensive social media campaign and frankly, it’s enough to make anyone want to return to the good ol’ days of print-only advertising.

For the vast majority of SME and third sector marketers, there’s neither the time nor the budget to get involved with much of this – a simple monitoring dashboard can replace the basics of the Social Intelligence sector, for example, and the new Social Ad networks are off in a different solar system.

There’s an interesting lesson here, though, As soon as you move much beyond the top ten or so big sites (Twitter, Facebook, Google+, LinkedIn, Blogger etc), having a conversation about “social media” becomes a slippery concept.

We spotted pretty quickly that Pinterest isn’t on the slide, neither does Scoop.it appear in the Content Curation section – and these are both sites we work with currently either for ourselves or clients, but they’re obviously not a major feature for the slide author.

We’d suggest that the selection of sites here is very “big brand” biased, as you’d expect given the source (Buddy work with eight of the world’s top ten global advertisers), but the point is this: you could easily have five very competent digital marketing professionals working in different strata of the social media world, whose areas of expertise barely overlap at all. So next time you mention that great niche tool you’ve just found and your agency contact looks blank, cut ’em some slack!

The slide is also a great illustration that nobody out there can possibly keep on top of all of this.  If you’re looking for help with your social media, it’s really important to make sure there’s a good match between your budget / online marketing ambition, and the environment your chosen agency is used to  – otherwise you could both be talking a very different language.