This post is coming to you courtesy of inspiration from the funniest and most feared (by marketers) page on Facebook – Condescending Corporate Brand Page.

They do a great job of bringing together the most wince-inducing examples of Facebook marketing, proving the old adage that the road to corporate embarrassment is paved with a desperate need for Likes.*

Painful though they may be, most of the posts highlighted are just extreme forms of techniques that many businesses use, to some extent, and some definite themes emerge over time.

So just for you, here is our roundup of the top five Facebook  Cheap Trick techniques.

*you’ve not heard that one? Yeah, it’s old as the hills. Honest.

This is the Facebook equivalent of those ridiculous phone “quizzes” at the end of TV shows. You know the ones, those with the oh-so-tricky questions to ensure that nobody in possession of a phone is ruled out from picking it up. The “What’s the capital of England, is it A)California, B) London, C) Fish” variety.

Only on Facebook, we have the space to be more creative, and that’s how we end up with posts like this: 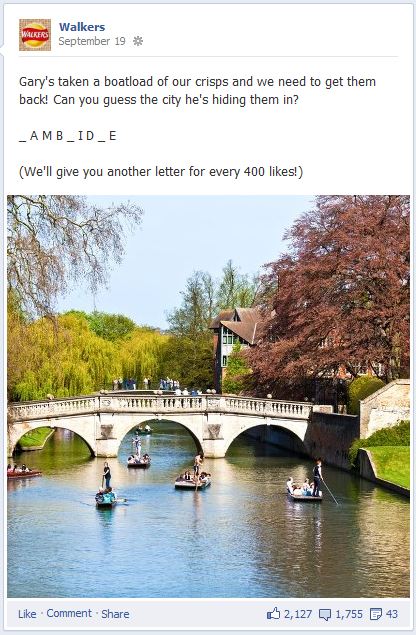 Desperate for engagement, any engagement, the poor Facebook admin jumps on any subject which they know will get people talking. No matter how irrelevant it is to their brand. The usual example of this involves neatly-scheduled Saturday evening questions about the X Factor.

Sometimes, they get away with it, and sometimes the post falls foul of the slippery slope from irrelevant to actively inappropriate. Controversial current affairs are particularly dangerous territory here – of which more later.

This is a concept that we first saw coming out of the US, where unsavoury characters were using it to scare kids into the equivalent of the old email chain letter forward. A scary horror-movie style grisly ghoul image with text along the lines of “share if you’re scared, like if you’re very scared – do nothing and she’s under your bed“. You have two, and only two, choices – you can Like, or you can Share.

Never let it be said that marketers don’t spot the zeitgeist…..

(with bonus points for the use of kittens, obviously). LIKE or COMMENT or SHARE but for the love of God, doing nothing is not an option!

A variation on the above, where the longsuffering audience is asked to click Like in response to something that pretty much everyone on the planet would agree with.

It’s only a matter of time until “Click Like if you’re a fan of breathing!” comes along.

As mentioned above, this is seriously, seriously dangerous territory. It’s a post about that thing that’s dominating the news right now. Yes, it’s topical. Yes, everyone’s talking about it. But unless you have something genuinely witty or insightful to add, maybe just count to ten before hitting that Post button.

Shoehorning (pun intended) your own brand into the mix is particularly risky, as illustrated by the gem below in response to the recent school shooting in the US: 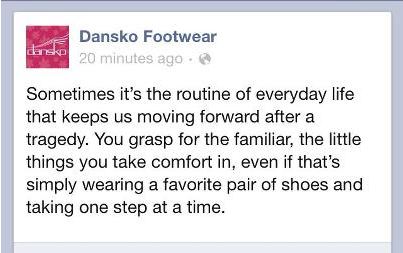 What do we learn from this?

Here’s the thing, though – despite the (hilarious) snarkfest over on CCBP, the numbers on these posts speak for themselves. Often, that brand’s Facebook audience (or at least, some part of it) love that stuff. No matter how banal, ridiculous or even borderline offensive some of these tricks may seem, thousands of customers will happily chat back or click the Like button just as they’ve been told to.

And everytime a punter clicks like, that activity feed tells all their friends, and on we go. This stuff works – for now, and for a certain demographic.

And for all Facebook marketers, there are useful lessons here about the psychology of engagement. Don’t demand too much thought or effort of your audience. Talk about stuff they’re interested in, even if you’re not. Be playful. There are ways that most of the cheap tricks above can be refined into valuable party pieces, if you give them enough thought.