Never thought i’d see the day, but this week’s blog is all about social media superstar technique…as demonstrated by the public sector.

Solihull Police’s Twitter account came to our attention earlier this week, as a result of some fun they were having with the snow-related shenanigans. They are doing a great job, and there are a whole bunch of lessons here that ALL organisations on Twitter can learn from – but especially those in the public sector, where the use of social media is far too often stilted, formal and dull.

Check out the account for yourselves, but in the mean time, here are our Big Four lessons for Twitter brilliance, as illustrated by Solihull Police.

1. Stop taking yourselves so seriously.

In fact, this could be lessons 1,2,3,4 and 5 as far as we’re concerned. As we’ve mentioned before, social media in general, and Twitter in particular, isn’t a place for po-faced corporatespeak.

Whatever it is that your organisation does, whether you’re Undertakers or brain surgeons, there is a lighter side ( or a darker, but still funnier, side, which is fine too).

It’s a fine line, of course, but mastering this one makes your Twitter feed 100% more engaging, immediately.

It also shows confidence in your organisation – you don’t feel the need to be defensive or stick to the party line. For example:

Well played with the retweet! I’m sure we’ve all seen the equivalent interaction where the slightly “off message” response would’ve just been ignored.

2. Join in with the community

Note: this does not mean making awkward comments about the X Factor.

Keep it to things which are relevant on some level – this might be thematically or geographically – in this case, the “snow crisis” which was affecting the local area at the time.

But again, humour is key: 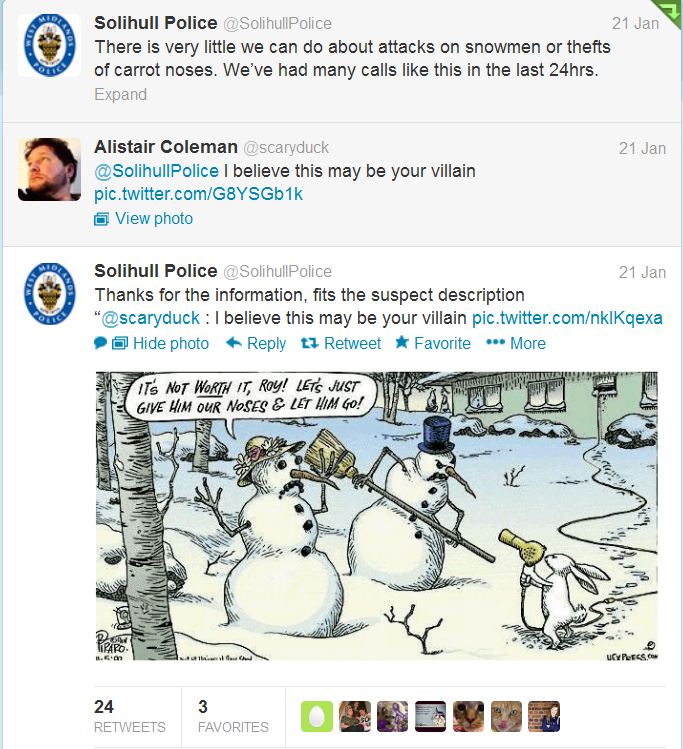 3. Involve staff, and have a holistic approach to social media

Particularly in a larger organisation, if your social media efforts are confined to the office junior in the Communications team, it’s going to be difficult for them to give a real flavour of what you’re doing. Not impossible if they’re supported by a good flow of information from other departments, but difficult.

Some staff are more talented communicators than others, and if you can find those individuals and involve them in your social media strategy it will make all the difference.

Across the West Midlands region there’s a well developed network of staff at all levels who are contributing – from the Solihull Borough Police Commander’s personal Twitter account, to individual officers’ blogs, which are promoted through the main Twitter feeds:

This gives a much better insight into the different staff roles, opens up additional channels of communication, and is much more resonant for outsiders than a generic “press release” style corporate commentary. Do check out PC Stanley’s blogroll and other social media links for a glimpse of the level of activity going on here!

It’s not all about fun, but our last example is perfect for demonstrating how serious and important that fun aspect can be.

There are two things which are notable about this. Firstly, whoever’s in charge of the @SolihullPolice feed has made the link between people frequently browsing Twitter to kill time while they’re on public transport, and the likelihood of the missing children being in transit somewhere. Then they’ve used that understanding to turn the public into the eyes of the police, by specifically addressing those people.

Secondly, without all of the “fun” stuff, the Twitter audience would simply not be big enough or engaged enough to have made that sighting happen. Twitter is amazing for mobilising a community, but first you have to build your community.

Again, that applies to all organisations; applying the same strict rules you’d use when approving a corporate brochure is likely to destroy any chance you have of harnessing the unique opportunities that Twitter offers.

Have you got any other examples of Twitter superstars in the public sector? Feel free to add them in the Comments if you do.