If you’re creating written social media content for an organisation, one of the biggest challenges is getting the “tone” right.

Conveying your message creatively requires a completely different approach to writing for other marketing materials – at least, it does if you want to make an impact with your audience.

For this post, we’re going to use Twitter to illustrate, because it’s the most challenging platform in terms of creating great content; it’s noisy, busy, there’s a lot of competition for your target audience’s attention, and you only have 140 characters to play with.

So, how do you need to change your writing style?

It’s so much easier to learn from specific examples, so we’re going to go very specific here to illustrate the difference between an “OK” tweet and a “great” one.

Let’s pretend we’re tweeting for a hypothetical software company. Our imaginary company is about to release a new version of its flagship product, and you’re going to tweet about it.

If you were following the “old” rules – the kind of writing required for a press release, or even an email to customers, the content would just announce the release:

or perhaps, shout about a few of the new features it includes:

There’s nothing wrong with these; they’re “OK”. A typical “OK” tweet for business keeps to the old rules; properly spelt and with correct grammar, and informal enough not to be wildly inappropriate for the Twitter environment. But, a “great” tweet does so much more.

A “great” Tweet will be more engaging (in terms of grabbing the imagination of the reader and creating some resonance with them), do more for the reader’s perception of the company, and make better use of the opportunities Twitter offers. Here’s our take on it: 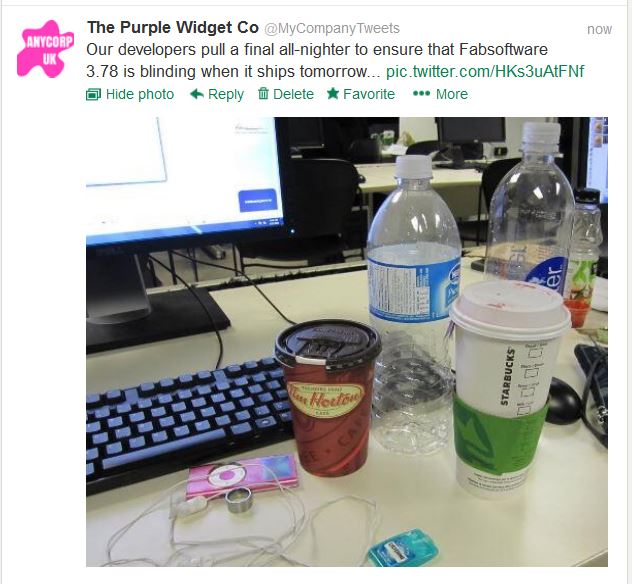 Obviously, the image is important, but we’ve just grabbed a stock one – your “real” image would show your developer team half-hidden behind pizza boxes, or a row of takeaway cups from a well-known coffee purveyor stretching away into infinity. You get the idea.

So what makes our last tweet better? A number of things, and these would be our “top tips” for making your social media content writing more creative:

The tweet gives a “behind the scenes” view of what’s really going on at Fabsoftware; the reader is getting a privileged insight. This is always more interesting than the official corporate line!

One of the messages that the tweet very clearly conveys, is “real people work here”. Showing that, over time, is a great way to build affection and brand loyalty – and also perhaps more tolerance for the odd mistake…

Playing to stereotypes about coders pulling fast-food fuelled allnighters – what’s not to like?!

Including a quick snapshot image (even if it’s been, ahem, slightly staged) works well because of the sense of immediacy. And as we all know, a picture can be worth a thousand words…..

Doing social media content well isn’t really about changing your writing style as such; it’s about thinking differently about how you present your organisation, and what you can share with the wider world. Get that part right and the writing will follow.