Vine and Instagram – a quick guide for business users

They’re both arguably social media sites in their own right, in that users create standalone accounts and can interact directly with one another. However, they’re most commonly used in conjunction with one of the bigger sites like Twitter or Facebook; so users who have already built up substantial networks on those sites can share content without having to build up a “new” following. They are also predominately in use as mobile apps rather than desktop websites.

Vine is actually owned by Twitter. Instagram used to be closely integrated with Twitter – for example,  a Tweet which included an Instagram image would show the image when viewed through Twitter.com, without the user having to click a link and load a separate page. Earlier this year, Twitter decided to launch their own Instagram-like functionality however, and to change their code so that only “their” images would be embedded in this way. Presumably that may also be linked to Instagram’s recent decision to launch short video clip functionality, putting them in direct competition with Vine.

In the case of Instagram, it basically boils down to: making your life or brand look cooler!

The main feature of the App is an extensive set of “retro style” filters and image editing capabilities, to be used on images you’ve snapped on your smartphone.

When Instagram launched, these capabilities were really revolutionary, allowing users to have the kind of control over how their images looked which had previously only been available to photographers with sophisticated software like Photoshop.

The attraction of Vine is perhaps a little less obvious, but possibly more addictive once sampled. The App allows you to create short video clips of just a few seconds long, but the creation tool allows the user to stop and start recording many times within that period, which means you can make animation or stop motion content. It may not seem that great an idea initially, but there are some amazingly creative users out there making highly engaging content.

At a fairly recent count (July 2013), Instagram has 130 million registered users. In August Vine had just 40 million. However Vine came along much more recently, and it’s likely that their user base will continue to grow more quickly than Instagram’s – that 40 million figure represents a tripling of their user base from just a few months previously.

In terms of who those users are, there is little detailed demographic data BUT, the fact that they are mobile-only Apps is going to immediately exclude those demographics who don’t use Smartphones – predominantly the older age groups. Although Instagram has a desktop site now, there is no such equivalent for Vine; if you come across Vine-generated content on Twitter, like this: 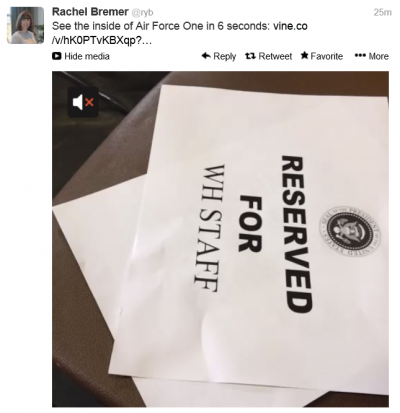 actually clicking on the link takes you to what is effectively a holding page inviting you to “install the app”. If you are viewing from a Smartphone with the Vine app installed, it’ll work. Otherwise, it won’t. This is the biggest and most obvious limitation of creating Vine content at the moment; although it is also possible to embed the content in a website, there will be many active social media users who don’t have Vine and so won’t be able to see it.

Yes, they most certainly can be. Some big consumer brands wanting to take advantage of access to the younger, trend-aware market jumped on Instagram very enthusiastically; Starbucks is a notable example, creating beautiful images themselves but also actively encouraging others to contribute their coffee-themed snaps. US Interiors firm Homegoods is taking a similar approach.

But really, any business can use Instagram to build deeper connections with their customers, for example by providing insights into what staff actually *do* on a daily basis. It’s fun, it’s quick and it’s easy – but you do need to apply slightly better quality control standards to your images than the average user, in order to keep it reasonably professional!

Vine’s big strength is in showing off visual content where movement is important – for example, a short video clip might show off a clothing retailer’s dress far better than a simple still. But there are also businesses using Vine in really creative ways, such as Natwest using it as part of their customer service strategy.