Page reach throttled? Get over it. 3 reasons why Facebook marketing is still a bargain

There’s been plenty of coverage over the last few months about the massive decline in Facebook Pages’ organic reach. In case you missed it: If a page with 5,000 Likers was regularly getting 1,500 sets of eyeballs on their page posts last December, as of now they’re probably getting more like six or seven hundred.

And yes, it’s deliberate; Facebook have been very open about their change to the News Feed algorithm. They’re a little less open about the reasons, pleading “improved user experience” (which doesn’t really hold up, as if a user didn’t want to see a Page’s posts they’d not have Liked them in the first place; or could just go and Unlike them) rather than “need to make a return on investment for our shareholders“.

It’s a shame they don’t feel they can be totally upfront about this: Facebook, and its shareholders, have invested millions of dollars in creating a concept which has changed the world and the way millions of people socialise. It’s not, in our opinion, at all unreasonable that they should start to ask for a contribution at some point. Charging for user accounts would be suicide, (Friends Reunited, anyone?!) so making a levy on businesses using Facebook as a marketing platform is the obvious way to go. And make no mistake – each and every post a business makes on Facebook is, and always has been, an advert!

Anyway, in some quarters there has been a somewhat hissy overreaction to this, with a few brands swearing that they’ll never talk to Facebook again. We think this is a mistake, and here’s why.

3 reasons why marketing with Facebook is still a bargain

The ability to ensure that your post or advert hits the exact people who are most likely to be interested in it, is still unequalled, certainly for anything with an audience the size of Facebook’s. (We’re not counting advertising your Pink Widget in the Pink Widget Monthly magazine, readership of 35!).

Compare the mainstream alternatives of billboards, magazines and papers, and even radio advertising: you are paying for access based on the size of their total audience, regardless of whether half of them are male and you’re selling a new type of pregnancy test.

Facebook allows you to target by criteria (geography, gender, age and many more depending on the type of content), and to pay only for access to that exact audience. Or, you can use what should be the best targeted audience of all: friends of your existing Likers. Provided you’ve built your audience the right way, to attract people who’re genuinely interested in your organisation, this will be great. If you’ve tried any of the shortcuts like buying followers….not so much. But you didn’t, right?!

Again depending on which type of content you use (ads vs boosted posts etc), you will get feedback on who’s seen your content and interacted with it, ranging from great to fantastic. Again, with traditional marketing you get almost none: yes you could use a tracking code in a print ad, but that will only capture those who take one particular action in response to it. You don’t know who’s read it and then had a bit more of a look around at your facebook page, or clicked through onto an article you included. Short of handing out the names and addresses of everyone who glanced your way, this is still as good as it gets.

Yes, you are now being asked to pay something. But do you know how the something in question compares to the alternatives? We were genuinely surprised, not having had a great deal of contact with other advertising mediums. So here it is, from a recent (very useful!) study by Moz.com : 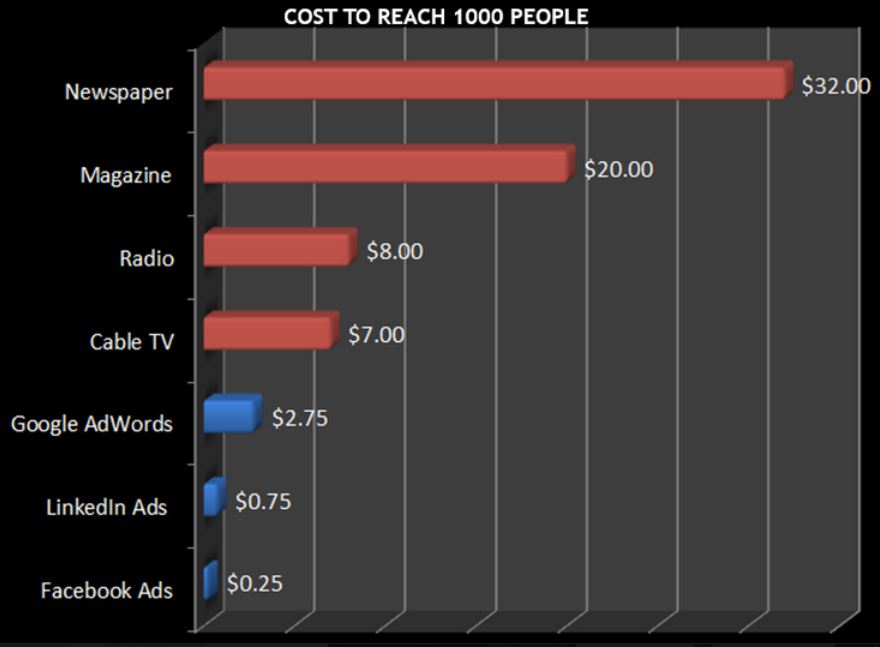 Facebook is WAY out in front for that one thousand eyeball fee, and print advertising, in particular, looks like pretty poor value.

So yes, Facebook has been a free lunch for organisations for a long time, and now it isn’t. But that lunch still isn’t being charged for at market rates, so it’s only likely to go up from here. Our advice is to appreciate the benefits, get smart about using Facebook’s many paid for options, and go get them!