The updated for 2016 version of this post is now available here: UK Social Media Statistics 2016

The turkey’s eaten and the tinsel’s down (although we’ll be eating chocolate until June), so it must be time for our annual roundup of UK specific Social Media Statistics. Which sites are doing what as we head into 2015? Who’s winning, who’s losing, who’s just generally losing it?!

In general, what we’re seeing from many organisations is much less in the way of dismissive “social media is trivial” stuff and a more positive view of whether it’s relevant for professional businesses. This is good news for both us and them! Even better, we get more enquiries where people are really starting to question *how* social media fits in to what they do.

Now, the numbers. As in previous years, we’ve  tried to ferret out the best data we can find for you on user numbers, trends, and demographics for social media in the UK.

And as in previous years, it’s been an absolute *&!^ing headache. Only more so. As the social media industry grows, ironically it gets harder and harder to find convincing, properly credited data for what’s actually going on with the usage of the various sites.

The sites themselves are absolutely shocking at releasing any kind of detail (at least, to the general public); if things are going well, we might just get a “X million user milestone globally” headline. Which is not a lot of help to anyone outside the US, as the US makes up such a dominant portion of the user base.

Sites which used to provide reasonably regular and reliable data, such as Comscore and Socialbakers, have either not updated their content for years, or are increasingly monetising it so that it’s only available to paying subscribers. Which is understandable, but again not much help to general marketers. In fact, it’s been so difficult to find ANY detailed data that we were tempted to end this post here, with an appeal to Twitter, Pinterest et al to get some analysis done and share it with us poor marketers!

So for what it’s worth, here are the few bits and pieces we have managed to put together, together with a little commentary on wider trends / changes affecting social media use for businesses in the UK this year.

Sources are noted at the end of the article.

Facebook is the one site where we’re pretty confident of the reason we’re not seeing much user data: very likely because there aren’t any stellar growth figures to announce. Where figures are being shared, they are there or thereabouts the same as last year; somewhere between 30 and 33 million.   Statista.com gives a figure of just over 30 million for the middle of last year.

A 2014 Ofcom report notes that Facebook remains the default social networking site for almost all UK adults who are online – 96%.

Some types of organisation who were initially a little slow off the mark, though, are now thriving on Facebook. The most obvious example of this is football clubs; Manchester United and Chelsea are now right at the top of the biggest fan page league for the UK, reflecting the huge leaps they’ve made in feeding their fans’ hunger for behind the scenes information.

From a business marketing point of view, the big change during 2014 wasn’t anything to do with user numbers or types, though: it was the ongoing changes to the News Feed Algorithm, which have made building a genuinely interested, qualified audience from Day 1 absolutely vital. Any organisation using Facebook should now be expecting to spend cold hard cash on it as a communications channel, and if that audience was poorly targeted, they might as well be chucking the £ notes straight down the dunny.

We’re REALLY disappointed with Pinterest for not getting any numbers out there last year, particularly because it the last batch of data (mid 2013) was showing around 2 million for the UK, a real explosion on the previous data set. We have a ton of anecdotal evidence, and some data from our own clients, suggesting that the user base has grown significantly again since then…but we can’t prove it.

We know that the user base is disproportionately female (over 70%), uniquely among the big social media sites. We also know that Pinterest is a strong driver for conversion traffic (users who are likely to buy when they click through to your website) and that those conversions tend to be of higher value than for other social sites.

Meanwhile, a ton of new and useful features have arrived, including Analytics for business users,  and Pinterest’s advertising offering, Promoted Pins. For any brand with a strongly female purchasing base, and good visual content, Pinterest remains a great place to be. We just wish they’d tell us HOW great.

For a minute here we thought we had some better news on the data front here. An emarketer report has some (slightly dated) hard numbers, plus forecasts which would bring us up to date.

But. They are predicting  one quarter of UK internet users on Twitter by the start of 2015. ONS data tells us that there were 38 million adults online in the middle of 2014, so that would give us a figure in the region of …9.5 million. Which is significantly less than Twitter’s own figures given at the end of 2013, which stated 15 million UK users. *Sigh*.

There is, though, at least a bit of a breakdown on who those users are. And here it is! 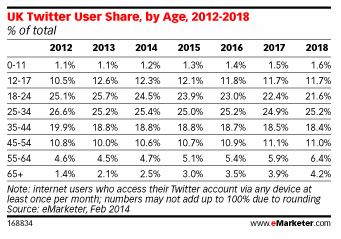 OK so we’re not always huge fans of LinkedIn, but on user data they get to go straight to the top of the class. Thankyou, LinkedIn.

Right where you’d expect it (on the company blog), there’s a lovely update telling us not just that the 15 million user mark was passed in 2014, but also some interesting nuggets about who those users are, which sectors are most strongly represented, and even which of the UK regions they come from.

As they’ve already put it into a pretty infographic, we’re just going to send you straight there. Here it is: who are the UK’s 15 million LinkedIn Users.

What else do we know? Well, that 90% of users are under 35, and again a high proportion are female. They’re also more likely to live in urban areas than rural ones.

Obviously that global number is a big deal, and a huge achievement for Instagram. It’s also a bit of a challenge for businesses, many of whom are now wondering whether they should prioritise Instagram over Twitter. The short answer to that is “probably not”, and the longer answer can be found here .