Hi, and welcome if you’ve not visited our site before – with the number of stats-hunters coming our way every year, it’s probable that you haven’t. We don’t do annoying popups begging you to subscribe to anything, as if you’re in the UK and needing any support with your social media, we’re sure you can figure out how to use the menus

So, on with the stats. This is the 2019 edition of our annual roundup of social media user stats for the UK.  We started these reports because most of our clients are UK focused, entirely or primarily, and Global data can hide pretty much all the useful details. So everything we’re quoting here is United Kingdom specific.

We’re very happy to report that this year’s post might just feature some of the most complete and up to date figures that we’ve been able to find in quite a while. That’s largely due to some smart use being made of the built in advertising audience tools that are now available from Facebook, Twitter and Instagram – if they want us to be wowed by their ad capacity, they have to tell us who we might be able to reach, right?!  There are also one or two organisations in the UK who are doing their own regular research work which helps a lot, too. We’ve listed all our major sources at the end of this article, and we are grateful to all of them.

That still doesn’t mean the numbers are necessarily perfect (anyone who regularly deals with Facebook’s advertising stats will be choking on their tea right now at the understatement!) but they should at least give us a clear idea of the direction of travel.

Additional note – there’s too much detail in most of the graphics here to be easily read in the thumbnail, but click them and you’ll get a clearer view!

This is a really nice graphic to show both the relative rankings of the social media sites in the UK, and also where there are major differences from the US. What IS the thing about Pinterest that stops it being as loved by Brits as it is across the pond? Who knows, but it just doesn’t seem to be getting the traction over here.

We should also give a dishonourable mention to Google+, which was finally put to rest in 2018, to the distress of absolutely nobody and the delight of social media agencies who no longer have to explain to clients why it was largely a waste of time..

So, these figures are based on the percentage of adults surveyed who said that they used each of the platforms, and were released in early 2018:

Another interesting aspect that we saw for the first time this year, was a breakdown by Ipsos MORI showing not just age and gender propensity for social media use, but also social grade – look at that peak around the C1 class!

Now moving on to the individual platforms:

We were broadly convinced that Facebook had pretty much done with user base expansion in the UK, as the numbers have been fairly static for a few years now. But.  Figures from the advertising audience tool suggest a total UK base of 39 million users; this is something of an increase from the stats we’ve had in previous years.  Taking into account all the negative publicity around privacy and targeting, and with its “cool” period way behind it, could Facebook really be still taking on users?

As this is the first time we’ve measured the user base in this way what will be most telling is where than number goes in future years. But having said that, if we put the 39 million number in the context of the demographic figures below, maybe it IS correct.  This survey shows a strong level of usage (or perhaps just registration?) amongst the youngest interviewees, and of course a much higher proportion of that age group are online than the older age groups who will be experiencing, shall we say, natural wastage. So maybe, as time goes on and the “less connected” generation die off to be replaced by an “always on” younger generation, the ubiquity of Facebook means that it is still able to show user growth.

Twitter, however, is definitely in the user growth plateau phase. Statista gives us a figure of 13.7 million users for the UK, which is there or thereabouts what we’ve been seeing for years.

The platform has become ever more closely identified with campaigning, politics and causes, which in itself can cause issues around potentially off putting aggressive or inappropriate user behaviour. It has introduced easier ways to report this during 2018, and also reportedly made headways against blatantly spammy behaviour such as multiple identical tweets.

However, many of Twitter’s most prominent users have become frustrated with the way it seems to pick and choose the topics where threatening behaviour is taken seriously. General awareness of bot networks using Twitter to spread misinformation has also become more widespread in the last year or so. As yet it’s hard to tell how or if these issues will impact on user numbers.

In terms of the demographics, we have the below survey-based information from we are Flint;  perhaps the least intuitive figure is the relatively large proportion of younger age groups who are still reporting that they use Twitter, despite the huge inroads of Instagram into that space recently. 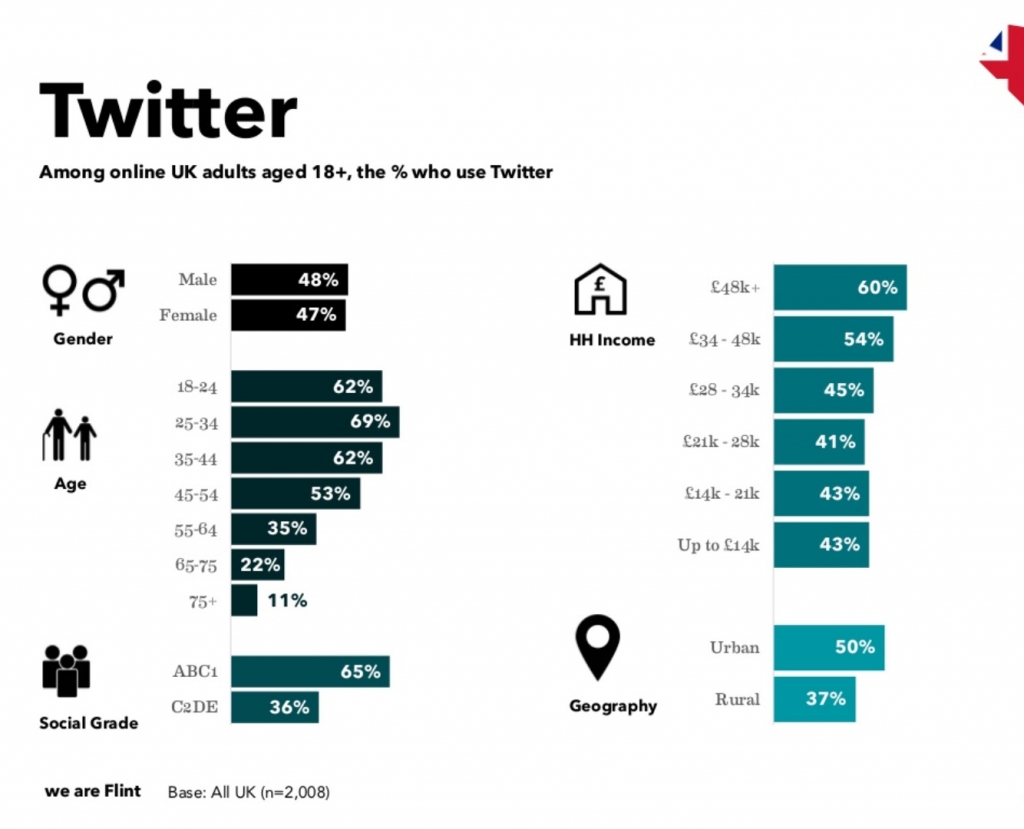 Based on Instagram’s stratospheric rise in 2017 and 2018, we might have expected this number to be higher…but we’re getting a monthly active users figure of 23 million for the UK here, which is still enough to place Instagram comfortably ahead of Twitter in the usage rankings: 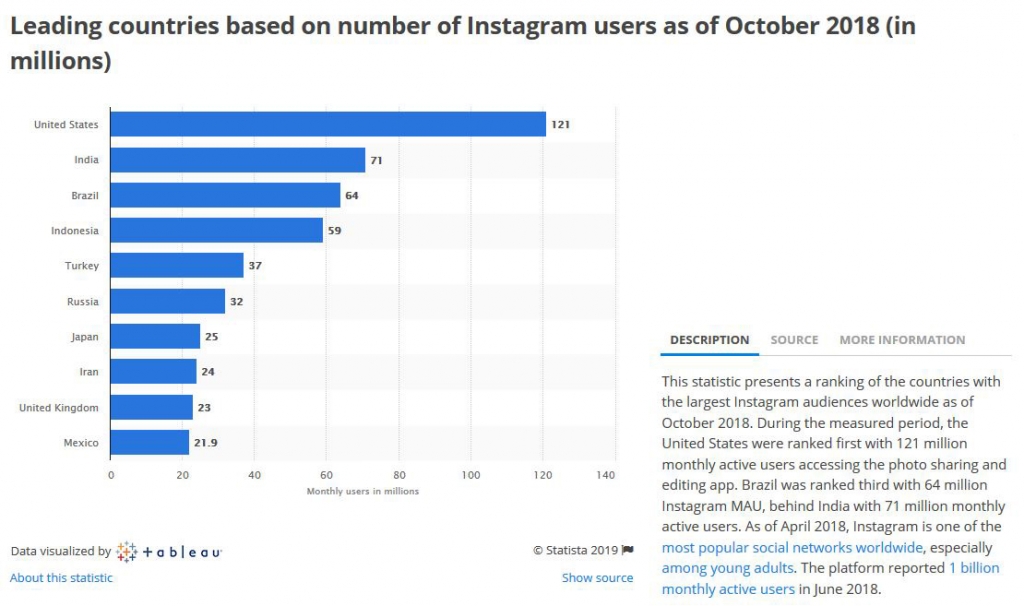 The introduction of the Shopping feature must have gone a very long way to driving Instagram’s growth this year – from both a user and a marketer’s perspective, providing a direct link feature that (slightly) makes up for the inability to include links in individual posts. It’s still restricted to certain countries though, and has a number of potential barriers – including forcing the seller to load their inventory to the Facebook catalogue.

If you need your demographic fix, here it is: once again, the 15-34 age group is really dominant on Instagram, and it appeals to women significantly more than men. 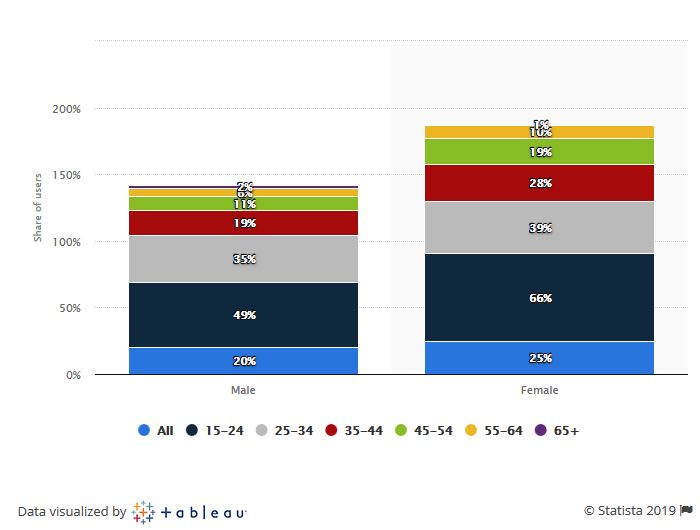 And finally, LinkedIn. Good old LinkedIn, we can always rely on them to release some data straight from the horse’s mouth, and this year was no exception.  Here we have a lovely global dataset which was provided in August 2018, and gives us 25 million plus users in the UK – just pipping Instagram to the post for second biggest UK platform! 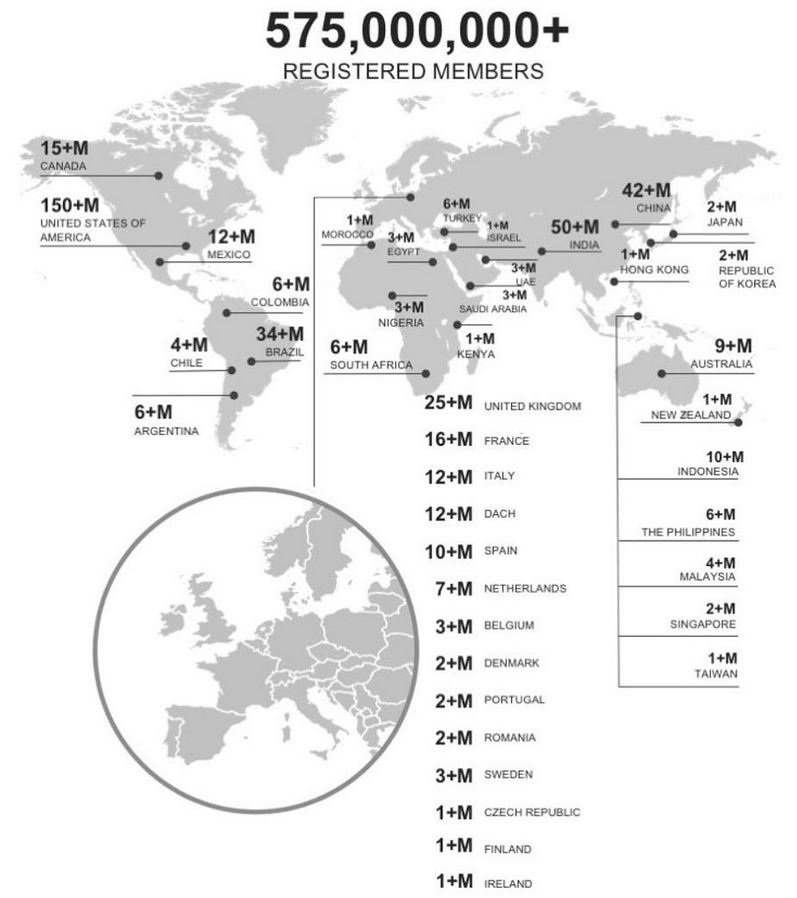 It’s also no surprise that LinkedIn are majoring on user registrations and not Monthly Active Users however, as we know from past years that LinkedIn has the highest gap between registered users and regularly active users – industry estimates tend to be between 10% and 25% of registered users who actually log in in any given month. It would be very interesting to know if LinkedIn is working on a cure for that…

There’s also been a major upgrade to LinkedIn’s advertising system in the last year, making it look much more like the google adwords / Facebook Ads manager setup and introducing some richer ad types such as carousel ads and video. Which is great, and would be truly epic if it was possible to increase the visit rate in certain sectors too, so that more of our intended target market would actually see those lovely fancy ads!

Ipsos MORI , Hootsuite, We Are Social, Statista, we are Flint .