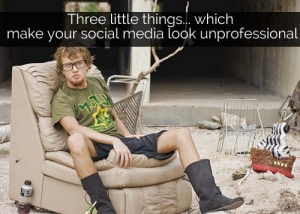 Is unprofessional the right word here? Partly, yes. But it’s more than that – there are a few little “tells” which undermine the credibility of your social media streams from a user’s point of view, particularly the more savvy users who have an innate understanding of how organisations tend to behave when it comes to marketing.  Things that suggest that just maybe, you’re ticking a box or desperate to fill a content void (an imaginary one – less is, increasingly, more in the social media space!), or just trying to cut some corners. Here are our Top 3.

First up: Retweeting without reading.

Always, ALWAYS click on the link of anything you’re about to retweet and at least give the content a quick read through. Of course, that should go without saying, because you’re only retweeting items you think are high quality and worth the time of your audience, right?!

Just this morning, I saw two eminently retweetable headlines pop into my feed, from two different very high profile social media-related content creators. Both of them already had multiple retweets, perhaps 5 or 6. I still clicked through to check that they delivered what I was expecting.  The first one lead to a broken link, giving a 404 Page Not Found error.  Oops. So immediately we know that the five previous retweeters hadn’t even got that far, or presumably they wouldn’t have bothered promoting a bad link.

The second was a slightly more subtle issue. The headline referred to “social media best practises” that need to be retired. Sounded interesting, if only as an indicator of how things have changed over the last few years. Clicking on the link, though…not so much. The article was both thin and very much phoned in – the tactics mentioned were about mass following, and automated messaging. These are things most of the industry put to bed years ago, if they ever went there in the first place.  So in that instance, retweeting would be both disrespectful of our audience’s time and intelligence, and also potentially make us look “behind the curve” – “oh look, this agency thinks these are great new ideas”!.

There are other issues that can hide behind those links though, ranging from misleading headlines introducing views you actually wouldn’t endorse at all, to phishing scams or similar.

If you’re serving the same audience with the same content on multiple social media sites, it can be very tempting to bulk schedule through one of the third party services, allow one site to cross post to another (eg “share to Twitter” when you create an Instagram post)  or even just copy and paste mindlessly between sites.

Some of the time, it’s possible that nobody will notice. But it’s a risky game, and can have results that will either irritate users or just make it look as though you’re not really that committed to the “afterthought” channel.

The worst example is direct cross posting from sites. Post from Instagram to Twitter, for example, and your users get an annoying link needing clicking, instead of being able to view your image within their Twitter timeline. But some of the bulk scheduling tools aren’t very helpful, either  – as things currently stand, that multi-image post you’ve set up on Hootsuite and scheduled for Insta and Twitter will lose all but the first image when it posts to Instagram. If you’ve referred to the other images in your text, you then have a dead giveaway that something’s gone wrong!

Creating content directly into the channel it’s going to be posted on, will always be the optimum approach. It also allows you to make use of the site-specific functionality – telling your Insta audience to Swipe Left on your post for your additional images (nonsensical in the context of any other site), or tagging other pages  in Facebook (doesn’t work if you try to do this from Hootsuite).

A small one, but there are still articles knocking around on Google which suggest this will give you some advantage, so it refuses to die.

The reality is that most users don’t, and never have, use hashtags on Facebook – except occasionally as a joke, a subtextual commentary on whatever they’ve just posted. Nobody is using them for discovery in the way that they might on Twitter or Instagram, simply because most of the interesting content is behind privacy settings anyway.

So really, sticking those hashtags on just tends to suggest a scattergun approach to marketing techniques (chuck some mud, it might stick!) or perhaps that you’re bulk scheduling alongside Twitter and just haven’t bothered to delete the hashtags for the Facebook version of the post.

So those are our suggested areas for improvement – feel free to comment with yours if there are any huge bloopers we’ve missed!